Want cleaner skin? Or looking for a way to get a spa-level cleanse? The Double Cleanse is a method of cleansing that achieves a thorough clean that doesn’t leave skin feeling dry.

The Double Cleanse is a two-step cleansing process that utilizes 2 cleansers: an oil-based cleanser and then a water-based cleanser.

A cleansing balm does the same thing; it just comes in a thick, solid paste (not a liquid oil).

Sometimes a cleansing oil comes in a gel. It looks like a gel, but it melts into an oil when rubbed into skin. And if that isn’t already confusing, I have seen some cleansing gels called “balms.”

A cleansing oil or balm is an excellent way to cleanse oily skin and control blackheads, breakouts, and other congestion. This is because oil attracts oil.

A cleansing oil can penetrate the oil (sebum) inside a pore, encapsulate the sebum, and easily lift it off and anything else oil-based, like makeup and sunscreen.

This is how you achieve a deep, thorough cleanse. It is a much more effective way to remove excess oil, makeup, and sunscreen than using a strong foaming cleanser or wiping skin with an alcohol-based toner (a terrible thing for skin).

While it might seem counterintuitive to apply oil to oily skin, the cleansing oil does not leave an oily residue on skin. Unlike a regular oil, an oil-based cleanser is specially formulated to rinse off easily with water.

1. Apply a cleansing oil to DRY skin (not when it’s wet), then massage it in using circular motions.

2. Massage the nose area well, where blackheads are common.

3. Next, wet your hands and rub your face with circular motions. The water will make the oil milky.  This process is known as emulsification – water emulsifies the oil, which means that water holds onto the oil so that it can be easily rinsed away along with the water.

4. Then rinse your face with water until everything is gone. Either splash with water over the sink or put your face under the shower. The milky residue should come right off. Your skin should feel clean and lighter.

Note: A cleansing oil is different from a regular oil. Look for a cleanser that is actually labeled a ‘cleansing oil’ or ‘cleansing balm.’  If you use a regular oil, it won’t rinse off and will leave behind an oily residue because it is not formulated to emulsify with water.

Occasionally, a cleansing oil is labeled ‘cleansing oil’ but doesn’t rinse off easily. This kind of oil is meant to be wiped off. It’s very confusing. The best thing to do is to read the instructions  carefully, and make sure it instructs you to rinse off with water. If it tells you to wipe off with tissue, then it’s not a true cleansing oil.

After the cleansing oil, you cleanse your face a second time with a water-based cleanser. Most cleansers are water-based – including foaming, gel, milky, and creamy cleansers.

You don’t need a large amount of the second cleanser because the oil-based cleanser does most of the hard work. In fact, a small amount of a gentle cleanser will do.

Are you currently relying on a strong foaming cleanser to clean your skin? Many of them are made of strong sulfates, which may strip skin of essential lipids. While you want to remove excess sebum, you don’t want to remove the lipids that make up the Barrier Function. Sulfates tend to do that.

If you cleanse your skin in the shower:

Why It’s Worth The Trouble

While it might seem like extra trouble and expense to have two different cleansers, it really is worth the time and effort to use both.

A double cleanse truly does remove everything. If you wear makeup or heavy sunscreens, your skin will need that deep cleanse.

After a day of being outside, where there is always some air pollution, you really should get those pollutants off your skin. Pollution damages and ages skin.

How Often Do You Double Cleanse?

You don’t absolutely need to do a Double Cleanse every day. But if you wear makeup or physical sunscreen every day, have oily or acne prone skin, live in a humid climate, or spend a fair amount of time outdoors, then you should definitely double cleanse daily.

If you live in a polluted area or densely populated city, you should double cleanse every night in order to remove all the pollutants that have accumulated on your skin during the day. You may not see it, but those pollutants are definitely there.

I double cleanse every night unless I have been indoors all day, AND I have not worn any sunscreen or makeup, AND it’s winter time when my skin is dry. This happens rarely, since I almost never skip sunscreen.

Do You Double Cleanse Twice Daily?

Some skin care professionals recommend double cleansing twice a day. But I believe the answer depends on how oily you are, whether you wear makeup, and what’s going on inside your body (i.e. how much it has to detoxify).

Oil is produced during the night while you sleep. If you have very oily skin, most likely you see this excess oil as shine when you wake up. A double cleanse in the morning will remove the excess.

But if you’re not oily or blemish-prone – say you’re actually dry – an AM double cleanse may be excessive. In that case, you should save the double cleanse for night time, when your face is most dirty, and use a gentle water-based cleanser in the morning. Surface oil builds up during the day and mixes with makeup, sunscreen, and pollutants. So skin is dirtier at night.

I typically double cleanse once a day, at night. Sometimes I’ll do it more than once if my skin feels especially dirty – for instance, if the weather is hot and humid.

Some Cleansing Oils Can Double Up As Eye Makeup Remover

Since a cleansing oil removes makeup, you may not need a separate eye makeup remover.

It depends on whether the product has any ingredients that irritate the eyes. Most cleansing oils don’t irritate the eye area. I have not personally experienced issues with eye irritation for any of the cleansing oils I have tried. So, sometimes my cleansing oil doubles up as an eye makeup remover. For instance, if I am traveling and trying to save on the number of products to pack.

It also depends on your personal preference. I find removing eye makeup with a cleansing oil messy. The whole eye area gets very black (from mascara or eye shadow), and I don’t want this grime to spread to my forehead or cheeks while massaging the oil into my skin.

So I prefer to remove eye makeup with a cotton pad and separate makeup remover first. Then I apply the cleansing oil.

But ultimately, it just depends on how much eye makeup I have on, whether I am cleansing my face over the sink or in the shower, and how much time I have.

A micellar water is both an oil-based and water-based cleanser.

The oil particles are packaged in micelles in a water-based solution. Micelles are a type of delivery vehicle in skincare. They encapsulate an ingredient and look like tiny spheres.

A micellar water feels like a water but performs like a cleansing oil. In France, where it is much more common, the micellar water is marketed as a makeup remover.

I find micellar waters extremely effective at removing makeup and sunscreen. But you need a cotton pad. Basically, you pour the cleansing water onto a pad and wipe over your face. Makeup and sunscreen come right off.

When I use a micellar water, I follow it up with a second cleanser (a gentle water-based cleanser) in order to achieve a thorough clean.

The micellar water I use is one by Bourjois, a French drugstore brand. It’s very effective (makeup comes off immediately in one swipe) and budget-friendly ($7-8 USD). Another good French pharmacy brand is Bioderma Sensibio. I wish we had this brand or an equivalent in U.S. drugstores.

Unfortunately, in the U.S. there are very few micellar water options in the drugstore channel. Micellar waters are not popular here. When I do see them, it’s usually as eye makeup removers. Until recently, even cleansing oils (the kind that emulsifies) were virtually impossible to find in drugstores too. But they are starting to pop up (e.g. Simple, Garnier).

My favorite cleansing oil is Dermalogica Precleanse. It’s also one of my favorite skin care products overall – a must-have in my cabinet. It’s one of the few products that I can recommend to anyone with 100% confidence. 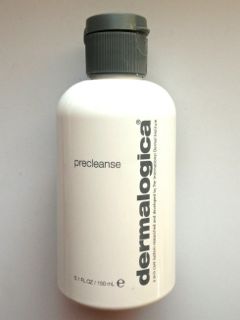 I particularly like how it’s easy to spread and massage into skin. It is a medium-weight oil that provides long-lasting slip so you can massage for a long while before rinsing. It doesn’t dry up with friction like some oils do.

The oil is also nourishing on skin. It’s made up of borage seed oil, kukui nut oil, and apricot kernel oil – all of which are rich in omega fatty acids, which are good for skin. Borage is especially good for reducing inflammation and calming skin.

The best part is, Precleanse works well for any skin type. The medium-weight consistency is very accessible – for the most oily skin to the very driest of skin. While a heavy oil might be a turn-off to some (it is to me), this medium-weight oil is easily tolerated by all.

Precleanse is so good it can be used alone, especially when skin is dry or in the winter. But if you want a completely thorough cleanse, use a second cleanser afterward.

Balm consistency – if you prefer handling solids to liquids

TIP: All the Asian skin care brands have cleansing oils (they are popular in Asia). So those are good lines to explore. They are much more budget-friendly too. Look for Japanese or Korean brands that are sold by Asian online beauty retailers (e.g. DHC is Japanese, Banila is Korean), not the pricey upscale brands you find in U.S. department stores (e.g. Amorepacific, Sulwhasoo, Kanebo, Cle De Peau).

Want articles delivered straight to your inbox? Sign up here.